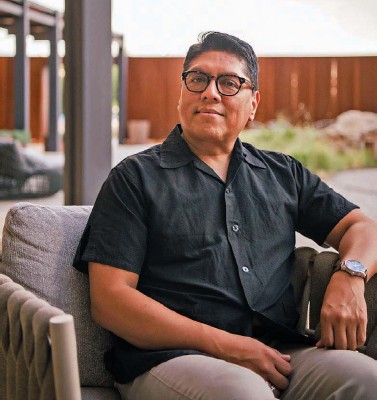 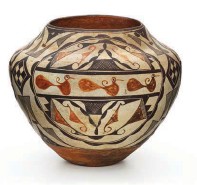 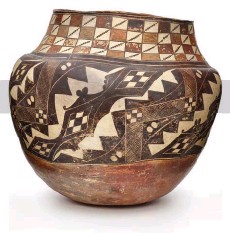 Brian Vallo wears many hats: he’s an anthropologist and the former governor and lieutenant governor of Acoma Pueblo. Since the early ’90s, he has been involved with the Native American Graves Protection and Repatriation Act, as well as with legislation that created the National Museum of the American Indian. He’s also a former director of the Indian Arts Research Center at the School for Advanced Research. While serving in that role, he was a guest curator at the Metropolitan Museum of Art, where he initially pitched the idea of highlighting the centennial of IARC’s collection at the world-famous museum. When his tribal leadership role took him back to Acoma Pueblo, he passed the baton to his SAR successor, Elysia Poon, and to the Vilcek Foundation in New York to organize Grounded in Clay: The Spirit of Pueblo Pottery, a first-of-its kind exhibition. Vallo remained involved as a member of the Pueblo Pottery Collective, more than 60 individuals representing 21 tribal communities who selected and wrote about the pots that appear in Grounded in Clay. The exhibition is at the Museum of Indian Arts and Culture, on Museum Hill, through May 29, 2023. It travels to the Metropolitan Museum of Art and the Vilcek Foundation later in 2023, to the Museum of Fine Arts in Houston in 2024, and to the Saint How has the exhibit evolved from conception to reality? BRIAN VALLO: In the very early period, we were thinking, “How do we engage contemporary Pueblo potters, artists, scholars, and cultural leaders in the development of this exhibition?” Because here was our opportunity to bring a show, featuring our material culture, to the biggest city in the country, one that has an international presence. It’s huge. The Pueblo Pottery Collective felt it was important to present this exhibit to our own people first, so it was decided that [the exhibition] would open at the Museum of Indian Arts and Culture. VALLO: All of the members of the Pueblo Pottery Collective selected an item to be in the show, and this is something that I don’t think has ever been done before. It is setting a new bar for how a museum or institution can work with source communities in a very collaborative way to create a narrative that is the voice of the descendants of communities. VALLO: The title really focuses on the spirit of the clay, the clay resource, the clay mother, the spirituality of the clay. [It conveys] the pottery making tradition that is alive and well in Pueblo country. Having the privilege of holding the jar, connecting with its form and construction, I spoke to it in my Acoma language: I introduced myself, shared words of admiration, and gave thanks for the opportunity to meet again. Only the maker knows the prayers, songs, and intended use of this exquisite Acoma storage jar. Did the potter make the large vessel for her own use? Was the jar made for ceremony? Was it commissioned by a clan group or society for a specific purpose? Whatever the purpose, this jar holds many stories from its time at Acoma and its unintended travels. "— From “Prominence and Prestige” by Brian D. Vallo, written for Grounded in Clay