The Wheelwright Museum of the American Indian marks 85 years 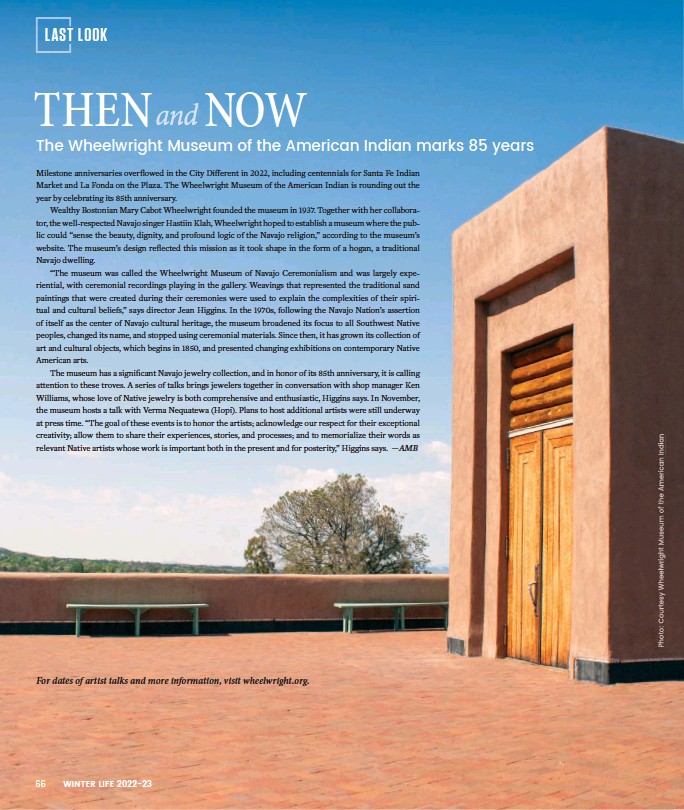 The Wheelwright Museum of the American Indian turns 85. Milestone anniversaries overflowed in the City Different in 2022, including centennials for Santa Fe Indian Market and La Fonda on the Plaza. The Wheelwright Museum of the American Indian is rounding out the year by celebrating its 85th anniversary. Wealthy Bostonian Mary Cabot Wheelwright founded the museum in 1937. Together with her collaborator, the well-respected Navajo singer Hastiin Klah, Wheelwright hoped to establish a museum where the public could “sense the beauty, dignity, and profound logic of the Navajo religion,” according to the museum’s website. The museum’s design reflected this mission as it took shape in the form of a hogan, a traditional Navajo dwelling. “The museum was called the Wheelwright Museum of Navajo Ceremonialism and was largely experiential, with ceremonial recordings playing in the gallery. Weavings that represented the traditional sand paintings that were created during their ceremonies were used to explain the complexities of their spiritual and cultural beliefs,” says director Jean Higgins. In the 1970s, following the Navajo Nation’s assertion of itself as the center of Navajo cultural heritage, the museum broadened its focus to all Southwest Native peoples, changed its name, and stopped using ceremonial materials. Since then, it has grown its collection of art and cultural objects, which begins in 1850, and presented changing exhibitions on contemporary Native American arts. The museum has a significant Navajo jewelry collection, and in honor of its 85th anniversary, it is calling attention to these troves. A series of talks brings jewelers together in conversation with shop manager Ken Williams, whose love of Native jewelry is both comprehensive and enthusiastic, Higgins says. In November, the museum hosts a talk with Verma Nequatewa (Hopi). Plans to host additional artists were still underway at press time. “The goal of these events is to honor the artists; acknowledge our respect for their exceptional creativity; allow them to share their experiences, stories, and processes; and to memorialize their words as relevant Native artists whose work is important both in the present and for posterity,” Higgins says.