A leg up to literary success for Santa Fe students 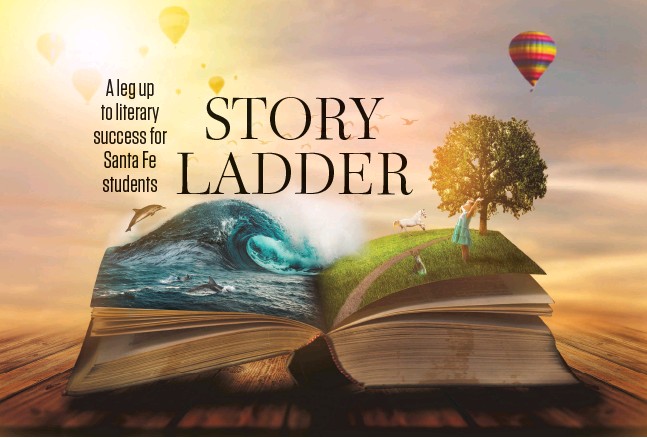 Santa Fe’s young writers and literature enthusiasts have extra reason to look forward to the Santa Fe Literary Festival: Story Ladder, the festival’s educational branch, offers programming just for them, including a slam poetry stage, dedicated space at the Santa Fe Convention Center during the festival, access to readings and small-group interactions with authors. “This year is a pilot program; we’re trying to keep it small, meaningful and community-oriented,” explained Clare Hertel, SFLF co-founder. Story Ladder is managed by Barbara Deswood, an educator who worked at the Academy for the Love of Learning. On a macro level, “Story Ladder is about encouraging local students to share their stories through the written and spoken word,” SFLF co-founder Julia Platt Leonard wrote in an email. The festival promotes the power of storytelling for people of all ages, and Story Ladder is tailored to students. For advice on building engaging content for young people, Hertel and her team turned to 826 Valencia, a national youth literacy and creative writing nonprofit founded by author Dave Eggers. They went to Eggers brimming with ideas, and he suggested keeping Story Ladder small at first and identifying existing organizations with which to collaborate. One of Story Ladder’s biggest events is a reading and Q&A for middle schoolers at the Southside branch of the Santa Fe Public Library with Sandra Cisneros, author of more than a dozen books, including the 1980s classic — and summer reading standby — The House on Mango Street. Students from several middle school classrooms will attend the event in person. It will also be broadcast on Zoom for other classrooms and the general public. “Sandra is not only an award-winning author; she’s so dedicated to students and to helping them see themselves in books and literature,” said Maria Sanchez-Tucker, Santa Fe’s community services director and a former city library division director. “Her work has inspired me, and I know she’ll inspire the students.” Sanchez-Tucker added that the library will host additional events (including a pizza and discussion night for teens) in the days leading up to Cisneros’ visit. At the time of our interview, arrangements were still being finalized, but once they are set, events will be promoted at all three library locations, on the library’s social media channels (including @sfnmpl on Instagram) and in the email newsletter that goes out to library card holders. A poetry slam stage sponsored by the Witter Bynner Foundation for Poetry is among the festival’s confirmed events, and at press time, a partnership with Cooking with Kids — the hands-on, internationally flavored cooking program operating in a number of Santa Fe elementary schools — and SFLF food writers and cookbook authors was in the works. Festival author and adviser (and Santa Fe local) James McGrathMorris recruited creative writing students from the NewMexico School for the Arts to help with festival grunt work — tasks like greeting and ticket taking — in exchange for a behind-the-scenes look at how a festival operates, plus free access to events and small-group or one-on-one time with lit-world luminaries. “They’re earnest, interested in being taken seriously, and this gives them that opportunity,” McGrath Morris said of the students. “Most aspiring writers of that age are desperate to talk to someone who actually does it — they want to know how they meet an agent or make a living or get a contract, and teachers usually aren’t the source of that kind of information, what we as adults call networking.” Exposure to authors Santa Fe teens and tweens read and admire is central to Story Ladder. In its inaugural year, it hopes primarily to help students make connections. As Hertel put it, “For some kids, getting to meet a Joy Harjo or a Margaret Atwood with 10 or 15 other people in the room can be life-changing.” Know before you go At press time, Story Ladder events were still being finalized. For up-to-date programming and information on how to get involved, visit sfliteraryfestival.org/ story-ladder.