Going the distance for girls 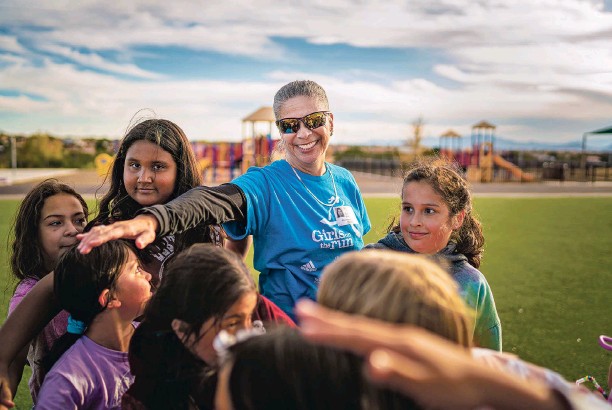 Those who know Karen Velarde Lashley can’t come up with enough words to describe her: inspiring, committed, detailed, thorough, professional, patient, encouraging. She’s always at the finish line, cheering on her team of girls. She was never much of a runner when she was young, said Velarde Lashley, 59, but she has spent the last 16 years coaching girls in the sport at Piñon Elementary School through Girls on the Run Santa Fe. The group is part of a national nonprofit that aims to help girls build confidence, kindness and decisionmaking skills, while ensuring they stay active and meet new friends. The group’s mission: to make the world a better place, one girl at a time. It trains girls to complete a 5K run while teaching them valuable life skills along the way. “They don’t have to be runners,” Velarde Lashley said. “They just have to get out there and try. They can run it, walk it, skip it, jumping or whatever. My goal is, I want them to start it and I want them to complete it.” Because of her longtime dedication to the program and the hundreds of girls at Piñon Elementary School who have participated, Velarde Lashley has been named one of The Santa Fe New Mexican’s 10 Who Made a Difference for 2022. She became involved as a volunteer with Girls on the Run at Piñon in 2006, when her oldest daughter, Janessa Lashley, joined. Piñon’s program had just gotten off the ground, and organizers were looking for someone who was willing to commit time to the young runners. “One of our coaches acknowledged that there was this particular parent who always came to practice at Piñon Elementary. That parent was Karen Velarde Lashley,” wrote Alice Temple in a letter nominating Velarde Lashley for the 10 Who Made a Difference honor. “We cajoled her into becoming involved. Sixteen years later and, at a minimum, 300 girls later, Karen continues to wow.” By the time her youngest daughter, Maquela Lashley, joined Girls on the Run a few years later, Velarde Lashley was a major part of the organization. “I’m not real sure how I got so into the program, but they just brought me in as a coach and then as a board member, and it’s been that way since,” Velarde Lashley said. “I’ve just been always been involved where my girls have been involved,” she added. “I just decided that, you know, I enjoyed the program. I enjoy what it’s all about, and there’s no reason for me to stop.” Maquela, now 21, said she is not surprised her mother stayed with the program, even long after both of her daughters had graduated from high school. “I think she’s very dedicated when it comes to volunteering and giving back. So, yeah, it was not a shock that she’s still there even now,” Maquela said. “I think she has a hard time letting go because she enjoys it so much.” Maquela said her mother’s love for philanthropy rubbed off on her children. “She definitely instilled that in me and my sister as well. I volunteer a bunch of places now,” Maquela said. Jannessa said she volunteered as a junior coach for Girls on the Run when she was in sixth grade and has recognized its positive effects. “It teaches how to have a positive mindset and how to deal with gossip and bullying and stuff like that,” she said. “It teaches them confidence in themselves; especially in a society today where everything is on social media and based on how you look and comparing yourself. I think it teaches how to overall be healthy within your body and confident within yourself.” Velarde Lashley was born in raised in Santa Fe and attended New Mexico State University. She didn’t start running until after college, she said. “It looked like something fun to do. I started doing races; I wasn’t the greatest runner, but I enjoyed it,” she said. “You know, I started and I finished and I had fun, and that’s really the whole point as far as I’m concerned.” While she spends many of her evenings helping girls reach their full potential, by day she’s a scientist who aims to help clean up the planet. As an environmental data steward at Los Alamos National Laboratory, she collects samples from places surrounding the lab that were contaminated decades ago as the lab developed nuclear weapons. This data is used in cleanup operations at the lab and gives Los Alamos County guidance on future development. According to the Energy Department’s Environmental Management Los Alamos Field Office, the national lab is responsible for at least 2,100 contaminated sites, ranging from small spills with a few feet of contaminated soil to large landfills encompassing several acres. “We have crews that go out and take sample in areas that have been used for experimental purposes 50, 60, 70 years ago,” Velarde Lashley said. “Right now, we’re pulling samples … reviewing the data, and I prepare the reports for us to present.” Whether she’s doing environmental work or inspiring girls at Piñon Elementary School, Velarde Lashley said she doesn’t do it for the recognition. “I don’t do this for myself,” she said. “I don’t do it for the attention. I give from my heart. If there’s a need and I can do it, then I’ll do it.”