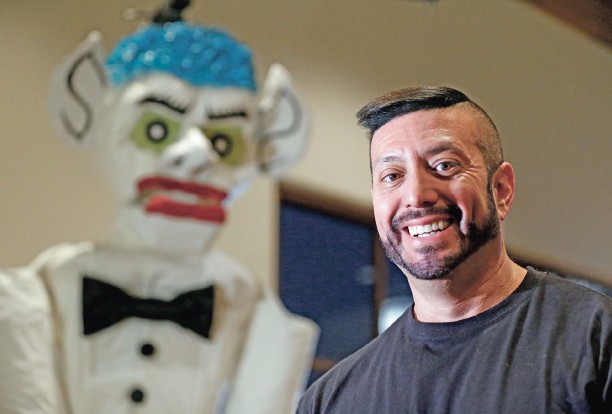 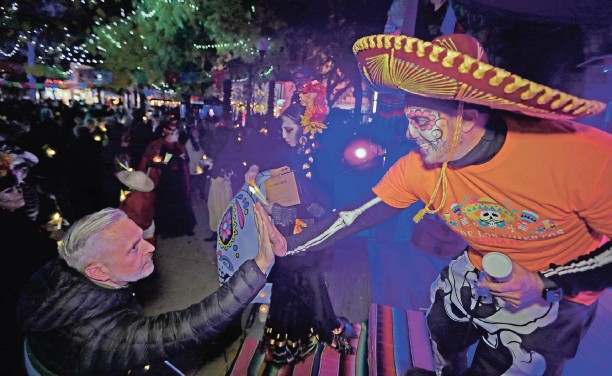 Ray Sandoval got “bitten by the Zozobra bug,” as he puts it, when he was very young. “As a kid growing up in Santa Fe, watching a 50-foot marionette burn with fireworks — who would not be excited about that? … For me, that was the hook as a young kid,” he said. Sandoval’s parents brought him to see his first burning of Old Man Gloom when he was 5 years old. A little later, when he started kindergarten, Sandoval called the Kiwanis Club to see if club President Griffin Dodge could speak to his class for show and tell. Harold Gans, who voiced Zozobra for 40 years, showed up the next day. “Really that idea of community service and giving back is something I’m so glad I was exposed to very, very early on with the Kiwanis Club because it really set a direction for my life,” Sandoval said. Forty-two years later, it’s hard to imagine Zozobra without Ray Sandoval. He organizes the yearly Burning of Will Schuster’s Zozobra and has been building Zozobra’s face since he was 18, when Gans retired and passed on the responsibility to him. He also has been helping light Zozobra on fire since the mid-1990s. “I just love how much our community loves this grumpy guy,” he said. While Zozobra is Sandoval’s lifelong passion, it is just one of several community events he organizes. He runs the city’s Fourth of July and New Year’s Eve celebrations, and came up with the idea of ringing in the new year by raising an 8-foot tin Zia. His latest effort was organizing a Dia de Muertos celebration on the Plaza in late October. These volunteer efforts have earned Sandoval a spot as one of The Santa Fe New Mexican’s 10 Who Made a Difference for 2022. Over the years, Sandoval has overseen some changes to the Zozobra burning to get more people involved. In 2013, when the event was held on a Thursday night and drew a much smaller crowd than in recent years, he decided to move it to the Friday before Labor Day. This would allow more children to attend and encourage Santa Fe expatriates to return for the celebration. “I really felt like the tradition could be lost,” he said. “The reason was … and I know this is a stupid pun, but I’m gonna say it anyway — you have to ignite children’s imaginations around traditions.” Sandoval also has tried to get people involved by reducing the secrecy around Zozobra, such as by opening the marionette’s construction to the public. “The Kiwanis Club is gifted to own the rights to Zozobra, but the city of Santa Fe owns Zozobra,” he said. Sandoval doesn’t mind when he receives criticism about Zozobra’s appearance because it shows how much the community cares. “I take it as a badge of honor,” he said. Sandoval initiated the 10-year “Decades Project,” aligning Old Man Gloom’s appearance each year with a different decade since Zozobra’s start in the 1920s. The initiative is leading up to the event’s 100th anniversary in 2024. “I like the fact that when we reveal Zozobra to our community on that Friday morning, we’re revealing something new,” he said. Sandoval is planning a big show in two years, with Zozobra “dressed to the nines” and more fireworks and drones than Santa Fe has ever seen, he said. “We’re really going to celebrate 100 years of this amazing event for our community.” Sandoval first began thinking about Dia de Muertos about five years ago, when he saw the film Coco. He realized over the years that few of the city’s Mexican-born residents attend Zozobra and most don’t feel comfortable visiting the north side of town. He wanted to find a way to bridge that gap. “It was really important for us to then create an event that was respectful of Dia de Muertos but it had a Santa Fe, City Different twist,” Sandoval said. Joanie Griffin, CEO of the public relations firm Sunny 505, was one of several people who nominated Sandoval for the 10 Who Made a Difference award. She met him about a year and a half ago when she worked with him on a project for Public Service Company of New Mexico, Sandoval’s employer. “His commitment to Santa Fe blew me away, which is really why I nominated him,” Griffin said. “If we had 100 more Ray Sandovals, we would have no more problems in this state,” she said. Sandoval said he is “very fortunate” to work for PNM, which gives employees paid time off for volunteer work and provides grants to nonprofits that have PNM employees on their boards. While he is honored to receive the 10 Who Made a Difference award, Sandoval said, he couldn’t make Zozobra and other events happen without all of the “dedicated volunteers” at the Kiwanis Club. “I’ve been gifted to be surrounded by people who understand the value of community,” he said. In an era when social media and political polarization seem to be pulling Americans further apart, Sandoval sees community events as something that can remind people there is more that binds us than separates us. “The more that we can get together and celebrate each other and each other’s differences and each other’s cultures, the more we understand, the more we appreciate about each other ... the more we can come together as a community and solve problems,” Sandoval said.