STORY BY BY MARIANNE TODD | PORTRAIT BY GABRIELA CAMPOS 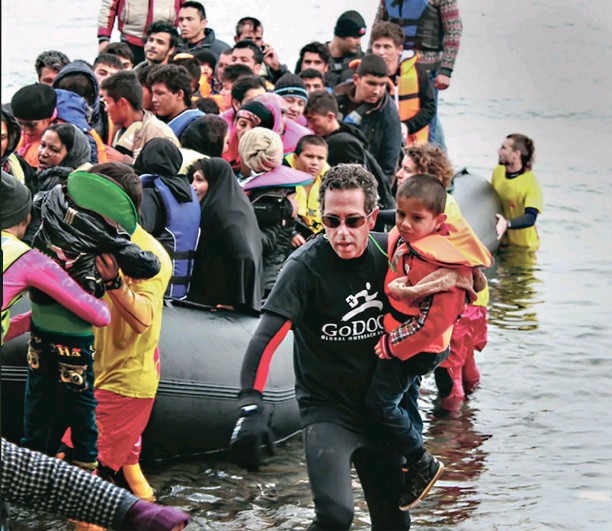 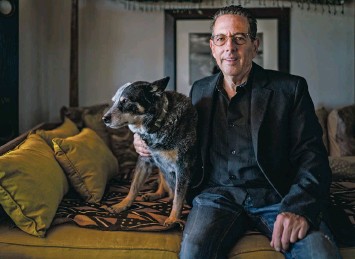 Andrew Lustig had pretty much everything he wanted. He led a successful multimedia corporation in New York City, juggling budgets in the tens of millions of dollars. He orchestrated deals with movers and shakers, big personalities, celebrities, network CEOs, selling the television shows his company created. There were huge payouts and high paychecks and days filled with high demands. But something was missing. The work didn’t quell his desire to help fellow humans. He went to an ambulance company and said, “I want to learn how to do what you do.” “Sometime around 40, I had a midlife crisis that lasted about three hours,” Lustig said. “There are so many people who don’t live a blessed life. How was I going to help them?” He went on to earn his medical credentials and worked domestically and abroad as an emergency medical technician, caring for one critically ill patient after another. That wasn’t enough, either. “Eventually I wanted a longer relationship with the patients,” he said. He became a naturopathic doctor, a medical professional trained to assist the body in its own healing. “The idea was that I could provide a number of healing modalities to patients. Ultimately, it takes a village to bring someone to full health.” With a desire to expand his humanitarian reach even farther, Lustig later created the nonprofit Global Outreach Doctors, which provides critical medical care and rescue services in countries affected by war, famine and natural disasters. The organization, which embarked on its first mission in 2015 in Nepal, has grown to more than 400 volunteers worldwide and is now offering aid in Ukraine. Because of this work, Lustig is being honored as one of The Santa Fe New Mexican’s 10 Who Made a Difference for 2022. “I fell in love with Santa Fe. I’ve always lived in a rural environment,” he said of his decision to move to the city 19 years ago. “I love the open sky and the friendliness. I enjoy the peace and quiet among the chaos.” The horse farm in Galisteo where he lives is not a far cry from his beginnings in Newtown, Conn. There, he said, he had a quiet and uneventful childhood. His mother was a psychiatrist; his father was in the media business. He made good grades, then enrolled in a “funky liberal arts school with a bunch of Hollywood kids called Hampshire College in Amherst, Mass.” For its inaugural mission, Global Outreach Doctors, also known as GoDocs, sent nine professionals — medical personnel and search and rescue teams — along with three canines to Nepal within 64 hours of a 7.8 magnitude earthquake. The mission grew to 22 team members, three vehicles and 1,000 pounds of food. The organization has provided hurricane relief in the U.S., has cared for Syrian and Venezuelan refugees, and has provided critical care in Iraq, Kenya and Ethiopia. It addressed gender-based violence in the Democratic Republic of Congo and created a clean water project in Nepal. “Finding the funding, building the teams, finding locations that are high need, low resource and partnering with other organizations has been a tremendous undertaking,” Lustig said. “In Ukraine, we have medical doctors, paramedics, nurses and nurse practitioners. The team sleeps in bunkers. Their location is secret, but they’re embedded with the Ukraine military at a trauma stabilization point.” The charity rotates about 20 medical teams on a monthly basis and provides logistics for ambulances and search and rescue dogs and drones. Lustig orchestrates it all, partnering with airline companies that provide transportation at no cost and with government entities, like the USS Comfort, a hospital ship. It’s also Lustig’s job to raise money for GoDocs through private donations and foundations. “We punch way above our weight,” he said. “We’ve done 38 missions in seven years — wars, refugee crises, earthquakes, typhoons.” Supporting a front-line team in a war comes with high costs, he said, adding he hopes to align with major corporations to increase mission funding. The volunteer job literally keeps Lustig up at night. “For the last seven months, I’ve been doing phone calls and texts and WhatsApp starting at 3 in the morning, solving complex emergencies with the front-line team when they need me most.” Alexis Brown of Taos, who nominated Lustig for the 10 Who Made a Difference award, said his genius is knowing how to navigate teams through difficult terrain. “Dr. Lustig lives a life founded on compassion and care and urgency. He acts swiftly when there is a need, and he knows how to cut through the red tape and not get stalled by bureaucracy,” she said. “This comes from his ability to build lasting connections with people across strata.” Kate Morton of Albuquerque, who serves as a GoDocs volunteer, said on some days the team treats more than 100 patients. “I have been so inspired by Dr. Lustig’s commitment to his communities, both at home and abroad,” she said. “I’m a raindrop in the ocean, but I want to be part of the solution, even in the tiniest way,” Lustig said. “When I wake up in the morning, I want to know I’ve helped tens of thousands of people.”