Love from a lowrider trunk

STORY BY BY MARIANNE TODD | PHOTOS BY GABRIELA CAMPOS 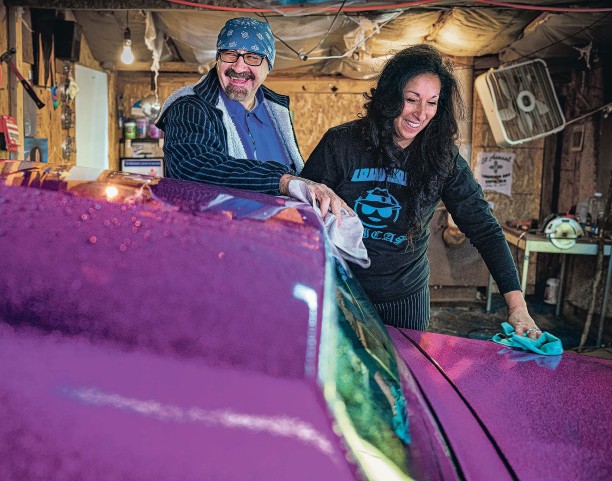 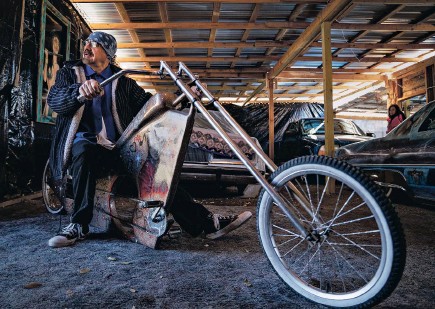 Arthur “Low Low” Medina took his wife’s breath away at first sight. Or maybe it was his lowrider. “I saw this car that just caught my eye, and I said, ‘Oh, look at the guy in it.’ Right away my eyes were set on him,” Joan Medina said. She remembers the car well. “It was a ’67 Pontiac Grand Prix, white with a candy blue and maroonish color and pinstriped in red,” she said. “The lights on those rims … this thing glowed through the neighborhood.” She was turning 13 at the time; he was turning 18. His car appeared in National Geographic. Then an MTV video. When the pair finally met a few years later at a roller disco, their fate was sealed. “We nicknamed ourselves Lion and Kitty Cat because he had hair like a lion’s mane and I was Kitty Cat because of the way I wore my eyeliner. We had jackets with our nicknames,” she said. Forty years later, Low Low still affectionately calls her Kitty Cat, and the lowrider that first caught her attention has been the couple’s glue since they met. He still takes her breath away — but in an entirely different way. “Hold on,” she said over the phone, breathing hard. There was pounding in the background. “OK, sorry. We’re trying to get a little museum going here.” The couple are building an extension to the garage at their home in Chimayó to house the “12 or 13” (Joan can’t remember) lowrider vehicles they have custom built through the years. The museum underway is but a small effort compared with the tightknit community the couple have worked to build in their beloved hometown of Española, where they not only shine a light on the lowrider culture but also volunteer their time to help organize local events, raise funds for nonprofits, collect goods for members of the homeless community, hold clothing and toy drives — and anything else they can do to lift neighbors in need. They recently held a lowrider “Trunk or Treat” for children at the Española Fire Department — a local Halloween favorite. Their many volunteer efforts in the community have earned the Medinas a spot as one of The Santa Fe New Mexican’s 10 Who Made a Difference for 2022. Joan Medina, 52, said the couple’s popular Show ’n’ Shine lowrider gatherings are one way they reach out to the community. “We did 254 Show ’n’ Shines before COVID hit,” she said. “They help the community. We get cars together, get a day and a time, and people set up their cars to call attention to what we’re trying to promote. “Lowriders are like a fishing tool,” she added. “They draw everyone into whatever is going on.” Since COVID-19 restrictions have eased, the couple are working to build their Show ’n’ Shines to pre-pandemic numbers. Joan and Low Low Medina are known for “being leaders in the lowrider community who selflessly give of their time to honor the arte y cultura that is central to Northern New Mexico,” said Patricia Trujillo, who nominated the pair for the 10 Who Made a Difference award. “If you have been to a Show ‘n’ Shine or enjoyed the long parades of bajitos, troquitas y bombas, this couple has probably been at the heart of organizing the call-outs and planning that make such events possible.” Both work at El Santuario de Chimayó, an early 19th-century Catholic shrine that draws about 300,000 visitors a year. Joan Medina sells jewelry, chile, natural soaps, sage and lavender; Low Low sells paintings and other art. Together, they work to ensure the santuario is safe from vandals. Trujillo said “generosity and kindnesses … are the Medinas’ nature.” They keep items in the trunks of their cars that can be shared with those in need, she added, and they encourage others to do the same. “They often have jackets, blankets, even tents in their trunks, and while they are throwing a cruise, they stop and offer items to our unsheltered neighbors,” Trujillo said. Tourists are fascinated by their lowrider cars, so the Medinas want to create a place to tell their lowrider story and share their design skills, which can range from the intensely technical to the profoundly artistic, Trujillo said. Joan Medina said their lowrider events are solely for the love of community. “This is art on wheels. The art is usually religious icons, and that’s how we started when we were young.” Low Low Medina, 59, said his grandmother gave him his first car, a turquoise ’57 Chevy four-door, when he was a teenager. He had spent his childhood taking care of her and helping with her weaving. “I got a lot of training making patterns for her weaving,” he said. “I learned how to paint, and the artwork blended all together into one and translated to the lowriders. Back then I didn’t have the money for the paint to customize my car, so I used a spray can with a paper plate and a paper cup to make the design.” Things aren’t so constricted these days. “We just finished painting a 1987 Grand Prix. It’s my style because I’m a flake girl,” Joan Medina said. “I love the metal flakes. It’s going to be debuted soon. We named it ‘Endless Love,’ number one because that was our song when we got married, and number two because we have an endless love for the community.”