EIGHTY PERCENT OF PRODUCTS SOLD at the Santa Fe Farmers Market are grown and harvested in Northern New Mexico, which makes it “one of the only true farmers markets in the country,” says market CEO Debbie Burns. It’s been that way since the late 1960s, when the New Mexico League of Women Voters and the county extension office helped local farmers selling their goods in parking lots establish the 80 percent rule. Value-added vendors, who sell things like jams, pastries, herbal tinctures and honey-based products, cannot exceed 20 percent of sellers at the market. “There are a lot of value-added people who want to be a part of the market,” Burns says, “but we are very strict at keeping it to 20 percent. Otherwise it becomes a crafts market.” The market also requires that most of the ingredients in valueadded products be sourced from local vendors or area farms. The primary mission of the Santa Fe Farmers Market is to support Northern New Mexico farmers and connect them directly to consumers. “Any way we can find to help our farmers sell their product, we will,” Burns says. She stresses that if ranchers and farmers can make a living selling what they produce, the land remains farming land and continues the multigenerational history and culture of the region. According to the Santa Fe Farmers Market Institute, the market’s nonprofit sister organization, New Mexico has lost 200,000 acres of farmland and more than 500 farms since 2000. The institute was established in 2002 to deter further loss of agricultural land and to provide a permanent venue for landbased producers. Organizers raised more than $4 million to build the LEED Gold-certified Santa Fe Farmers Market Pavilion in the Railyard, where the market is held each Saturday year-round and on Tuesdays May through November. The building also houses several office spaces, Second Street Brewery and the Camino de Paz Montessori Secondary School. The pavilion has “given consistency to the growers and the community,” says Jennifer Fresquez of Monte Vista Organic Farm, a second-generation grower at the farmers market. The home also allows the institute to expand its mission to not only support farmers but also to help the public access fresh produce and learn about good nutrition, while keeping food dollars in the local community. As part of this work, the institute developed Double Up Food Bucks for Supplemental Nutrition Assistance Program (SNAP) recipients. At the market’s information desk, they can exchange money from their electronic benefit transfer (EBT) cards for double that amount in tokens, which they then use to purchase fruits and vegetables from market vendors. The number of people participating in the program doubled last year, says the institute’s interim executive director Andrea Fisher Maril. “It’s great how many tokens you get,” says Monte Vista’s Fresquez, who attributes the success of her family farm to the farmers market. “It adds up to a ton of money.” The institute also teamed up with Guadalupe Credit Union to provide its vendors with low-interest microloans of between $250 and $5,000, and up to $10,000 in certain cases, to help with costs of seasonal operations, infrastructure and other expenses. Marketing programs that aid producers in website development, social media, logos and branding are also available to vendors. “It’s really amazing,” says Fresquez. “We all know how to grow our stuff, but with COVID and so many changes to how people shop, it’s really helpful. They were totally hands-on, helping us develop websites, and they had a graphic designer make logos or edit existing logos.” Fresquez also credits the market’s community supported agriculture (CSA) program, which began in 2019, as particularly helpful in this pandemic year. When restaurants and other traditional markets for produce shut down, the program helped fill some of those gaps. And because there is no middleman here, as there is with many CSA programs, local farmers receive a higher percentage of payment for their goods. “Having the opportunity to sell that much more product is really beneficial to growers, especially smaller producers,” says Fresquez. “It’s also connected us to different markets and people who don’t necessarily come to the market each week.” The institute directs its energy toward the community too. To help conquer food insecurity and health issues related to poor nutrition, which are higher in New Mexico than the national average, the group partnered with Presbyterian Health Services and La Familia Medical Center to establish Fresh Rx. Doctors participating in the program can “prescribe” food vouchers, which patients exchange for tokens to buy fruits and vegetables from market vendors. Other popular draws at the market are the cafés and the gift shop. “We’re always trying to up our game,” says Farmer’s Market CEO Burns. “If you Google us, you’ll find that we are one of the top 10 farmers’ markets in the country.” But it’s the produce that keeps people coming back. “Once you get hooked on fresh produce,” Fisher Maril says, “it’s hard to buy anything else. It just tastes better.” Wendy Ilene Friedman is a regular contributor to “The Santa Fe New Mexican.” Her writing has appeared in regional and national publications, including “The New York Times” and “The San Francisco Chronicle.” In her free time, you can find her trail-riding her Spanish mustang or taking classes at Santa Fe Community College. 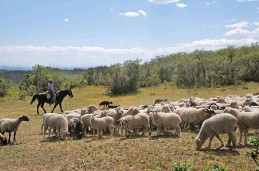 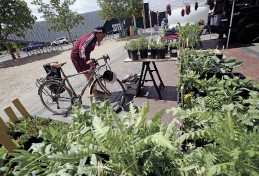 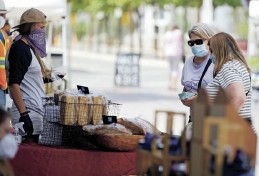